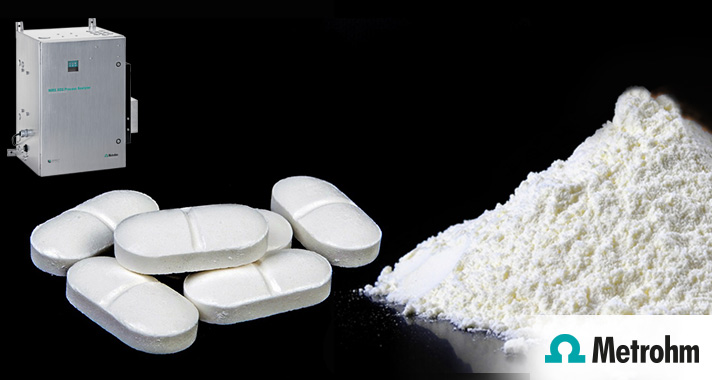 This Application Note shows the capability of a novel probe design equipped with a NIRS XDS Process Analyzer for predicting the residual amounts of solvent during the drying phase in a high-shear granulator. This system configuration can reduce the powder sample density variance such that moisture and solvent levels can be accurately modeled and predicted in process.

This Metrohm Application Note describes the utilization possibilities of a new sensor design that permits, in combination with an NIRS XDS Process Analyzer, the determination of solvent residues in a High-Shear Granulator during the drying phase. This system configuration reduces the scattering of the density distribution of the powder samples so that it is possible, directly in the process, to model the water and solvent content precisely.

Near-infrared spectroscopy (NIRS) is an analytical technique based on absorption measured in the near- infrared region of the electromagnetic spectrum that is between the visible and the mid-infrared. The fundamental absorption bands of functional groups occur in the mid-infrared and are very strong. The overtone absorptions of these fundamental bands occur in the near infrared (NIR) spectral region and allow direct measurement without sample preparation due to the relative weakness of absorption. The OH, CH, NH and SH bonds have the strongest overtone absorbance in the NIR region.

For years many processes have been monitored real- time using NIR spectroscopy and fiber-optic probes. The challenge in high-shear granulator monitoring is the turbulent flow of the powder granules. If a probe is inserted normal to the nominally circular flow direction of the powder, the effect of the turbulence caused by the high-shear chopper and the purge gases constantly and randomly changes the apparent sample density in front of the NIR probe window. This makes analysis impossible due to constant wide range random change in spectral absorbance. When the sample density change is brought within an acceptable, narrow range, NIR analysis can be performed using multivariate methods that account for density variance as well as residual granulating liquid variance. This Application Note discusses the use of a novel probe design that reduces the powder sample density variance to a level at which the granulating solvent level can be accurately modeled and predicted

One of the elements of the PAT initiative is to use in-line analysis to increase process understanding and control and to verify product quality and release it for subsequent processing without delay. Using NIRS, the process can be monitored for low levels of residual alcohol for better process control and end-point determination. NIR spectroscopy is a rapid, nondestructive technique often used for in-process analysis of moisture and alcohols in the manufacturing environment. Measurements can be made and analyzed real-time with no sample preparation and the data can be analyzed and stored automatically. NIRS fits in well with Process Analytical Technology (PAT) initiatives as proposed by the FDA. The process can be monitored for low levels of residual alcohols and other process constituents to yield better process control and quality management.

Monitoring the removal of granulation liquids such as methanol is important for product purity.

The NIR instrument used to collect spectra was the NIRs XDS Process Analyzer. Spectra were collected in the reflectance mode from 800 to 2100 nm with 0.5 nm data intervals and 32 scans were co-added to produce a single spectrum. Monitoring the removal of granulation liquids such as methanol is important for product purity. Methanol level is typically measured by taking a sample with the sample thief and sending it to the laboratory for GC analysis. GC requires lengthy analysis times and calibration samples must be run often.

The in situ NIR spectroscopic method demonstrated the ability to predict samples of lactose anhydrous and starch 1500 with residual amounts of methanol during the blending, granulation and drying operations. Although accuracy is not known, the trended predictions appear smooth and reasonable from known initial and end point data. The single-pot granulator trial indicates the ability of the NIR process instrument with the novel angled probe to measure a moving sample, in turbulent flow, when it is placed in the sample medium in a manner that provides sufficiently constant sample density. Proper probe placement and design in process equipment is essential for success of the implementation of in situ measurements.

For further details refer to the Application Note “Near-infrared spectroscopy for monitoring a single-pot granulator” below.