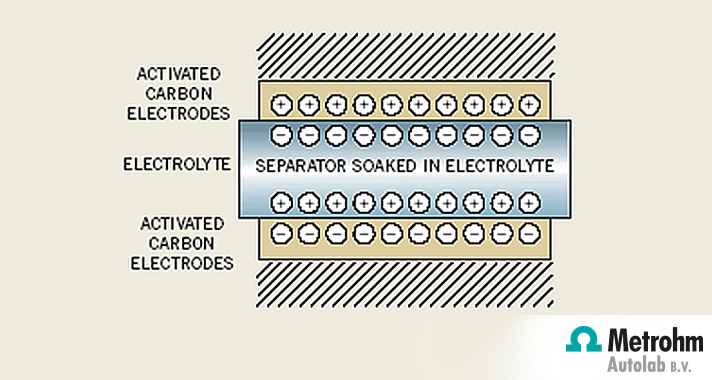 Working principle of a supercapacitor

Supercapacitors (also known as ultracapacitors, electrochemical capacitors, or double-layer capacitors) are electrochemical devices that have the ability to store and release charge and deliver high power densities over short periods of time. Their ability to store electrical energy efficiently and release electrical energy very quickly make them ideally suited for applications where short time backup power and peak power needs are critical

Principle of a Supercapacitor

Like conventional parallel plate capacitors, they consist of two electrodes separated by an electrolyte. Capacitance increases with the increase with the surface area and the decrease in the distance between the two plates. Supercapacitors improve on conventional capacitors in two important ways:

The high energy content of supercapacitors originates from the extremely high specific surface area and short distances between electrodes. New materials such as Carbon nanotubes, conducting polymers are being developed to increase the capacity and efficiency of supercapacitors.

The performance of a supercapacitor is determined by measuring its capacitance (which can vary with the applied potential) and equivalent series resistance (ESR). These can be measured by charging it at constant current and monitoring the potential response (Chrono Potentiometry), applying a potential pulse and monitoring the current response (Chrono Amperometry) or with Electrochemical Impedance Spectroscopy (EIS).

In the Autolab Application Note SC01 (download it from the link below) the three characterization methods are illustrated with the AUTOLAB PGSTAT302N/FRA2 potentiostat/galvanostat system in combination with Booster 10A.