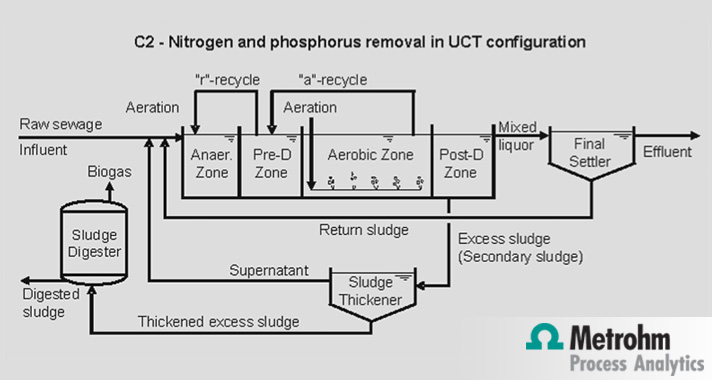 The importance of nutrient removal in the form of nitrogen and phosphorus in industrial and municipal wastewater has increased significantly over the past decade. Aim is to minimize water pollution and avoid eutrophication of water bodies. Nitrogen in wastewater is mostly organic nitrogen. Ammonium/ammonia and nitrate must be treated to meet stringent effluent requirements imposed by legislation.

In the aeration basin, nitrification takes place where ammonium is oxidized to nitrate via nitrite using oxygen and different species of nitrifiers (bacteria).

During subsequent denitrification, the nitrate is further converted to nitrogen gas in the absence of oxygen; thus creating an anoxic phase and using a specialized heterotrophic bacteria. The N2 formed is harmlessly released into the atmosphere.

It is therefore very important to measure the ammonia, nitrate and nitrite concentrations continuously throughout both stages. This ensures complete nitrogen oxidation and nitrogen gas conversion.

An increase in ammonia and nitrite levels in the effluent will indicate an insufficient aeration step or that a change in toxicity or pH is disturbing the nitrifier population.

Robust self-cleaning online process analyzers are the only reliable measurement solution for industrial, sewage and municipal wastewater applications with high concentrations of solids and bacteria.

Metrohm (MEP) can provide a multi-parameter Process Analyzer for the simultaneous analysis of ammonia, nitrate and nitrite over a wide concentration range covering all influent and effluent requirements.